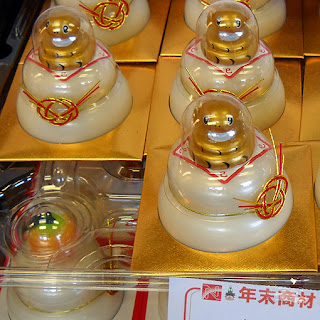 If only snakes were really made of gold!

Happy New Year to all of my readers! Thank you for continuing to follow my blog(s), and for taking part in comments now that they have been enabled. It is a common custom at the start of the new year to reflect back upon the old one, and I must say that the past year has been a very rough one for me indeed.

Before I left Japan, I spent a great deal of mental energy attempting to prepare myself for the changes to come. After 23 years there, and only visiting home once during that entire time and that visit coming very early in my stay, I knew that it was going to be a bumpy ride. Boy howdy, I was right.

There is an experience that many Japanese people have after they have lived abroad for an extended time in which they have been fundamentally changed such that they cannot fully integrate with their own culture upon return. These "returnees" sometimes find the restrictions of their culture stifling and hard to bear. Their cohorts find them weird and harder to live with. I always felt that this was something that easily happened to the Japanese because they lived in a straight jacket and once released, they found it hard to climb back into those confines again.

Well, I'm here to say that it doesn't only happen to "them". It absolutely happened to me, too. I have been fundamentally changed from my time in Japan and find adapting to life here very hard. There are numerous things which have been difficult to adjust to and it has been emotionally overwhelming at times. I don't want to make an exhaustive list, but just one of the many things I've found hard to deal with is the arbitrary nature of social life in the U.S.

In particular, the unchecked and intentional aggressiveness of people and the arbitrary nature of social behavior have disturbed me. There are no rules, save personal ones, and when they are unintentionally transgressed, you will be handled in an overtly unkind manner. People will go out of their way to confront you angrily just as easily as they will go out of their way to be kind to you by holding open a door or offering to carry your bag. The chaotic nature of both acts of kindness and hostility is something I have had problems finding equanimity with. This is but a tiny portion of the reverse culture shock I've been attempting to deal with, but it has been a pretty significant one.

I don't know if this was the America I lived in 23 years ago, but I don't recall it having been so. Of course, when you are a part of the river and moving along with the flow, you don't really notice that it is doing anything special. When you are rock standing still and watching it wash all around you at breakneck speed, you see every ripple and current, every twig and branch being torn apart by it's furious movement.

This blog continues to act as a filtering and organizing tool for my transition from Japan to America as well as a way of noting my memories. I can't express enough how valuable writing is as a process and would encourage any reader who finds himself thinking too much to consider using public writing as a way of coming to understand oneself and the world. If you want to make a positive change in the coming year, using a blog as a productive tool for self-knowledge and growth could certainly be a good resolution.

My best wishes for health, peace, and happiness to all in the coming year.
Posted by Orchid64 at 12:00 AM