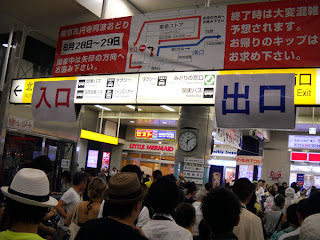 The biggest shock to my system upon returning to America has been the frustration of driving. I never especially enjoyed it, at least not in California, and now I find it really troubling. It could be that 23 years off the road have made me skittish, or that people really have gotten stupider and more reckless on the road. I suspect it is the latter because of higher levels of distraction due to all the little devices people can't seem to keep their hands off of like their cells phones, MP3 players, and GPS's. I know that I've seen quite a few people actually weaving around on crowded roads because they're too busy playing with their cell phones to watch where they are going. Frankly, I find it more than a little scary.

I've also found that, despite the fact that I hated hauling my shopping around in heavy backpacks, I miss walking to places most of the time. I have a sense that I'm somehow "failing" if I actually need to get in the car and go anywhere. I also find that things are far more boring in the suburbs in the U.S. because everything is massively spread out for car access. If you like to walk, and I really do, you're going to hard-pressed to do much more than walk over block after block of blandness.

The public transportation in Japan was not perfect, but it was very, very good. If I had to make a top 10 list of all of the things I miss about Japan, I'm pretty sure that it would be number one.
Posted by Orchid64 at 8:00 AM