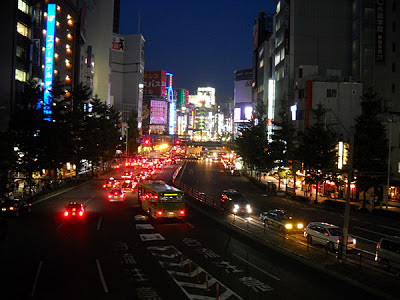 I grew up in a tiny rural town. The benefits of this were that it was not noisy, driving was a breeze as there was nothing resembling traffic, and there was little risk of any sort of crime even if you were out in the middle of the night. That being said, it wasn't all trees, deer, and bucolic splendor. There were few to no job opportunities and nothing to see or do. Alcoholism was rampant for the aforementioned reasons. Near the end of my time there, drug abuse was also a rising problem.

Since I grew up in such sparse surroundings, the hardships of city living hit me pretty hard, especially in the earlier years. It's dirty, noisier, crowded, and likely more dangerous than rural living (though not necessarily in Tokyo). Being overstimulated as someone with my particular nervous system (for me, the lights are brighter, the touches are more painful, the noises are louder, and the smells are stinkier) was something which continually sapped my energy and made me more prone to fatigue and depression.

By the end of my time in Japan, however, I'd largely adapted and now I'm struggling with the loss of stimulation from living in the suburbs. When I first returned, I spent three months in a rural area and just about lost it from the lack of anything to do. In the end, it seems that the negative aspects of living in a metropolis did not outweigh the positive ones. If my husband and I could have accomplished our goals in Tokyo, I'm pretty sure we never would have left. In retrospect, I miss living there despite all of the things I complained about in my original post.
Posted by Orchid64 at 8:00 AM