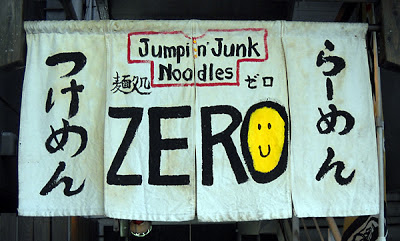 If I don't teach people in Japan English, how will they know signs like this are actually funny?

Every time a foreign person asked me about my job in Japan*, I always emphasized the aspects that did not pertain to teaching English. This was actually easy for me to do since two big components of my work for the better part of my time there were writing textbooks and doing all of the desktop publishing to put them together. I also wrote a regular column for a few years for a print magazine in English.

That being said, I was a teacher for a lot of my time and the larger truth is that I enjoyed teaching and found it fulfilling and challenging. Yes, it was tiring a lot of the time. Yes, there were annoying students and bad experiences, and, absolutely, yes, the schools sometimes treat teachers abysmally and take advantage of them. Welcome to the world of grown-up employment in which you find your job isn't 100% fulfilling and employers often treat you like crap. However, I didn't want to talk about being a teacher for those reasons. I didn't do so because I knew that I would be judged negatively the vast majority of the time for being what many viewed as the bottom feeder among foreign workers in Japan.

Since coming back to America, no small number of people have asked me what I did in Japan. My husband and I tell them the whole truth and not one of them has scoffed at us, given us a look of disdain, or said a bad word about such work. In Japan, the suggestion that you were a loser for being a teacher was often overtly or covertly made.

Upon returning to the U.S., it has been very refreshing having my job in Japan be just a job and not be seen as some indication of personal failure. I absolutely, categorically do not miss the contempt with which foreigners in Japan held English teachers.

*Note: the vast majority of Japanese people did not possess this sort of disdain for those who made a living as English teachers. A small number did, but it was extremely rare in my experience.
Posted by Orchid64 at 8:00 AM