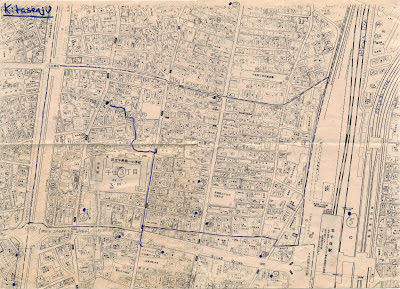 Right-click (PC) or control-click (Mac) and load this in a new window to see the full-size map.

One thing that you find many foreign folks (and some Japanese) find confusing is navigating the streets in Tokyo. I've heard that the addressing system was designed according to when the buildings were built rather than based on any sort of sequential numbering. I'm not sure that that is true. It really doesn't matter because the "why" is less important than what is.

The map shown above is Kita-senju in Tokyo, the first place in the city that I ever had an opportunity to fully explore. One of the things I loved the most about Tokyo was the way in which everything was crammed together and you could see a multitude of shops, houses, and businesses in a very small space. Exploring several blocks would often yield a lot of oddities and surprises.

The above map was sent to me in 1988 and shows a few different routes to my former-boyfriend's and now husband's former apartment. He also numbered a bunch of spots at which businesses that he regularly patronized operated. Some are record shops, of course, as he and I were both big into that sort of thing back then. 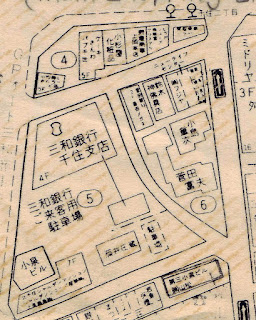 At the time that I got this map, I had no idea what any of it meant except for those areas in which he wrote and told me what was up. I'm not great at reading maps in any event, but this was more confusing than usual. If you look carefully at Japanese maps, or attend to what is happening when you walk around, you see that a lot of the blocks are very oddly shaped and there are rarely any street names. It can be pretty confusing.

I was told by a student that the curving streets and triangular and trapezoidal blocks were shaped around natural bodies of water that were important at one time. She said she enjoyed tracing the history sometimes of these streets, but I have found scant information on them in English and never had the initiative to bother to look into it in Japanese.

Looking at this map, I do remember that I got lost one time while exploring Kita-Senju during my month-long stay in Japan in 1988. To those who don't remember, I didn't start my 23-year-long stint there until a year or so later in 1989 and I'm referring to my initial vacation there. I had all day free while my boyfriend worked and I wanted to return to a large supermarket that he'd taken me to once called "Topos". I headed off in what I thought was the right direction and got turned around somehow. I didn't find the store, and I didn't know how to get back to the main street that led to the station which would in turn allow me to find his apartment.

I can't relate to you the fear that comes from being alone in a foreign country in which you cannot communicate with people and have no ability to make a call and contact someone if you are hopelessly lost.  Back in those days, getting a phone required a deposit between $500-600 (for a land line) and my boyfriend couldn't afford one. I hadn't thought to write down his work number in case I got lost, and I probably didn't know how to use a pay phone anyway.

I remember the panic and then breaking out in a sweat. I also remember looking around frantically to see if something in the distance would point me in the right direction, but I didn't see anything that would act as a significant landmark. In the end, I tried to retrace my steps and found my way back, but I was a lot more cautious about setting out on my own and exploring after that. I became extremely cautious about noting my surroundings as I walked and lost a lot of my confidence in running around the city alone.

After more experience in Japan, I now know that there would have been a good chance that, had I approached a Japanese person in a shop, they would have been able to speak enough English to help me out. Well, maybe not just anyone, but someone would have likely helped a confused foreigner find her way to the local subway station. At the time though, I didn't even know enough to try and felt utterly trapped by my circumstances.

The irony is that, has I had the map that is shown above, I doubt that it would have done me any good. Besides the fact that I can hardly read an American map, there's the fact that all of the writing on it would have been gibberish to me. Sure, I could have attempted to do some character matching, but it is very hard to do even that when you are unfamiliar with the characters. Also, the bottom line is that, without a "you are here" point on a map, you're really out of luck when you're lost.
Posted by Orchid64 at 8:00 AM

Email ThisBlogThis!Share to TwitterShare to FacebookShare to Pinterest
Labels: getting lost, random memories