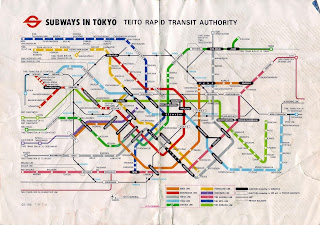 Memory is a funny thing, stranger than most of us realize. Unless you've been writing things down or recording them, there's a good chance that what you think was so was not really the case. This is not a new thought, but I do believe most people re-write history more often than they realize. Often, they do so to their advantage, but it's not uncommon to do so to one's disadvantage.

No one is immune to this sort of confusion, and certainly I am not. One example I came across recently was in regards to how I initially handled the transportation system in Japan. In 1989, when I went there for the second time, the time that started an unanticipated 23-year stay, I was terrified of the train system and got rather lost in Ikebukuro station the first time I exited the wicket from the Marunouchi line. I got turned around and went out the opposite side of the station and was very worried that I'd be late for my first day of work there. I remember arriving barely on time, and being hot, sweaty, and frantic. This memory, I'm fairly sure is true.

This was not the memory that I re-wrote, but there was another that got a revamp in accord with this later vivid memory of confusion and frustration. As a result of that experience, I grew very timid about taking trains in Tokyo alone (as opposed to with my husband) because I feared getting lost. As time went by, I told myself that I didn't really feel comfortable navigating the complex transportation system alone until relatively late in my stay in Tokyo. It turns out that that was far from the truth.

The somewhat phobic response to the train and subway system was written after that one "traumatic" experience Clearly, I had lost my confidence. I discovered recently that that was absolutely not the way it was during my first visit in 1988. I had zero recollection of the fact that I rode the subway from Kita-Senju to Shinjuku and other major shopping areas alone during the month I vacationed there and visited my future husband. Not only did I go to those areas alone, but I transferred between lines, exited stations, and went out shopping by myself. I know this because I said so in my own words on cassette tapes 25 years ago.

While I was in Japan at that time, I made a tape for my sister in which I talked in detail about a lot of things that happened during my stay, but I never finished it and never sent it. It turns out my husband still had that tape in a collection of them that he had in storage all these years. I talk in the middle of my 1988 visit about things in close proximity to them occurring. It seems that, before that one scary experience, I was pretty brave about navigating the byzantine and illegible (to me at that time) public transportation system.

The map that I include with this post is of the system as it was 25 years ago. If you were to compare it to a map from this time, I'm sure you'd find that stations had been added and that all new lines are included (including the Fukutoshin line which was completed in 2008). The paper map itself is rapidly becoming an anachronism. Such maps used to be available in copious numbers at every station, but are increasingly reduced in quantity and availability. Most commuters use their cell phones if they need an overview of the railways, or, more likely, an online site which allows them to calculate the best way to get from point A to point B. If you've never used such software, it allows you to find several different routes on various lines and compare the time and cost for the best way to get from point A to point B.

These sorts of maps seem crude and inefficient by comparison to such software. They rarely included both JR (Japan Railway) and the Tokyo Metro (subway) since these systems operated in competition with one another. The software favors no line, and even includes buses. However, like many things in the digital age, they offer efficiency, but no tangible memento. It's just a piece of paper, but it serves to remind me of the fact that I once had a great deal more courage than I allowed myself to remember.
Posted by Orchid64 at 8:00 AM