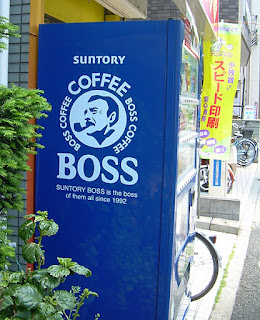 As I remarked in the original post, vending machines are everywhere in Tokyo. I had also been told that, even in the countryside, banks of machines sometimes stood in the middle of nowhere. More than one Japanese person told me that they saw them as an incredible waste of energy. I wonder if, in the face of strict energy conservation after the Fukushima meltdown in the wake of the March 11, 2011 quake, such machines were removed. I know that vending machines in Tokyo were being frantically re-engineered to reduce their carbon footprint. This was something I heard firsthand from employees whose job it was to make such machines (such was the nature of my work in Japan that I had access to such people on a regular basis).

The truth is that, I think all cultures have various visual blight and wasteful energy consumption. Sometimes it is trash on the lawns of rural homes. Sometimes it's ugly newspaper distribution boxes. Sometimes it's graffiti on city streets and walls. Now, I think that banks of gleaming machines were really not such a bad thing after all. It could very much have been worse. The "worst" part of it all, in retrospect, was the valuable sidewalk real estate that they sometimes consumed in areas that sometimes were congested with heavy foot traffic. I now find that I actually regard the total suffocation of some areas with vending machines as a bit of nostalgia rather than see it as an annoyance.
Posted by Orchid64 at 8:00 AM