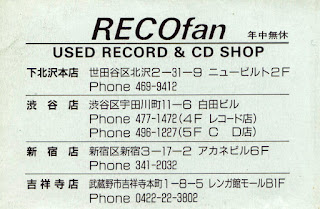 Back in the day, used record shops used to dot the earth. Well, they used to be scattered all over Tokyo. Record collectors could roam far and wide looking for that rare bit of vinyl or a bargain on more commonly available releases. They could do that, or they could simply buy the annual record map book that told you where to find all of the best places. 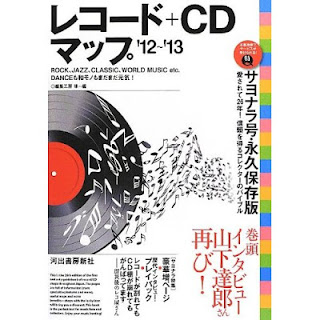 One of my husband's and my earliest incentives to learn to read Japanese came from trying to decode these books. Each year or two, a comprehensive manual that told you the location and types of inventory of various collectible record stores all over Japan was released. It was our happy pleasure to buy a new one as they came out and look for new locations. Since we spent most every weekend mining the known locations for records that my husband and I wanted to collect, fresh territory was always an exciting prospect.

Unfortunately, as time went by, the number of used record shops started to decrease rather than increase. While many things that started to diminish during our time in Japan were due to the weakening economy, this was due at first to the encroachment of CDs and later to the conversion to digital technology. While more portable, such advances dramatically reduced the collectible nature of second-hand items. My husband and I used to delight in finding lps and singles with their unique Japanese pictures and inserts (posters, stickers, etc.).

With CDs, the size limited the capacity of the record shops to provide interesting add-ins. In fact, what we learned was the best way to get cool extras with CDs was to be present in Japan at the time of a new release. If you bought a new CD, there was a chance that you could get some sort of promotional goodie at the shop (usually a poster) when you bought it. This situation, unfortunately, has also vanished as time goes by as record companies seem to be less lavish with their marketing money these days.

As the image above shows, the record map book continues to be updated and published, but I'm sure that there is less to them than there once was. It's not only the technology and the fact that few people are buying records of any sort in this age of MP3 players. It's also online sellers and auction houses. There is much less of a need for a brick and mortar store than their once was and maintaining a shopfront in Tokyo is a pricy endeavor. 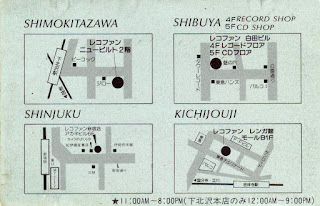 The business card that is featured in this post is from 1988 or '89 and shows various branches of the used record shop "Reco-Fan". If you look carefully, you'll see that it reveals it's age in that there is no URL for the business. That's something that would be a huge omission in this day and age.

During my first visit to Japan in '89, my future husband and I spent quite a lot of time visiting such places. As a die-hard collector of items related to the rock group KISS, I found them to be fascinating treasure chests of records I rarely saw. Of course, my boyfriend had already raided those chests for the "gold", and we didn't find much that was new during my visit.

That being said, there is a sequence of photographs of me and my future husband in record stores which show me looking through the bins. He had to show me which ones contained the KISS lps since I couldn't read anything. There was also a certain technique to rapidly sifting through a huge volume of discs that he had to teach me. Finally, there's a shot of me purchasing something, and the shop clerk handing me a promotional poster at the same time. It was a mundane sequence of events, but it all seemed much more meaningful because of the perceived exotic nature of the discs with their Japanese "obi" (paper band) wrapped around the sides or tops and the potential for little extra surprises.

Reco-fan, unlike many of the smaller operations that we tended to frequent, is still open at this time. However, it was never the best place to find rarities. It's stock tended to be pretty picked over, relatively expensive, and to be missing any added Japan-only touches. One of the last things my husband and I did before leaving Japan was to visit the Kichijouji branch of Reco-fan. It was less than a shadow of its former self and it was never the best to begin with. Bins of laser discs lined the front and records of no particular import tended to fill out the center. CDs at slightly discounted prices lined the sides. The truth was that I wanted who even went to such places anymore. It just felt very much like a bag of Halloween candy that had had all the good stuff picked out and all that was left was the gum and candy corn.
Posted by Orchid64 at 8:00 AM