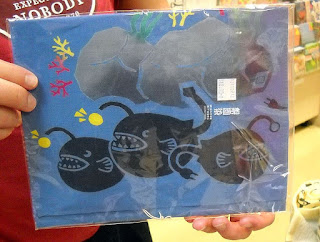 Yes, it's a special setsuden cloth. Note the fish whose tail isn't plugged in and his light is off. He's doing his duty!

When I left Tokyo in March of last year, I believed that setsuden, or (strong) energy conservation efforts would end by the summer of 2012. This movement, which came on the heels of the controversy over the use of nuclear power after the Fukushima nuclear reactor disaster, caused such a backlash against the use of nuclear power that all of the reactors were shut down at one point. It appears that setsuden, which means sweltering summers both indoors and out and chilly winters, is there to stay for awhile. While the cold never bothered me in Tokyo, the summer heat and humidity is insanely oppressive. With thermostats set around 28 degrees C./82 degrees F (or higher)., there was frequently little difference between indoor and outdoor temperatures. While gritting my teeth and sweating through the heat was annoying, it was especially galling in the face of businesses that left their large doors gaping open and allowing pressure air conditioning to escape.

It often seemed to me that there was a ridiculous variation between what individuals and businesses did in this regard with old folks doing their duty and suffering (and dying) of heat stroke while businesses only addressed the bottom line. I won't miss setsuden both for the discomfort it brought on and the hypocrisy it revealed.
Posted by Orchid64 at 8:00 AM