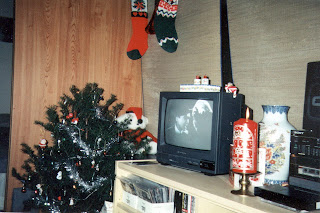 I think this had to be our second Christmas in Tokyo. The T.V. was tiny so it had to be early on, but there were too many decorations for it to be the first one.  There were also too many videos in the cabinet for it to be within 7 months of our having moved there.

I will be returning next week to my "Tales From a Japanese Office" saga, but it was too good an opportunity to pass up to go back and explore some of my earliest Christmas memories from Japan.

When my husband and I moved to Japan in 1988, we took several books along to help us adapt to living there. One of those books was a book called "Food Buying in Japan" (linked book is newer than the version we used). This book endeavored to educate you such that you could go into a Japanese market and not be totally confused and overwhelmed. It may seem strange to people living there now to think that it could be so disorienting, but there were far fewer imported food items back then and far less English. It was the wild, wild East as far as figuring things out in supermarkets.

This guide, hard as it tried through pictures and English with Japanese and Chinese characters, did not really solve our problems. It didn't help that the book was in black and white and the pictures weren't the best, but the hardest thing was comparing squiggles in the book to squiggles in the store. We couldn't learn to read Japanese based on what the book presented.

The bottom line was that the book simply did not - and likely could not - cover all of the bases we would have wanted covered. It seemed to assume that we wanted to understand and prepare Japanese dishes for the most part so it focused on a lot explaining about what those things were. What we really wanted back in those early days was for it to mainly help us find Western food and avoid the "weird" Japanese stuff.

Most of the time, we resorted to visual assessment with the occasional tactile evaluation. Those round things that look like bread? We gave them a squeeze and they were hard as a rock. It wasn't until  many years later that I learned that they were wheat gluten. 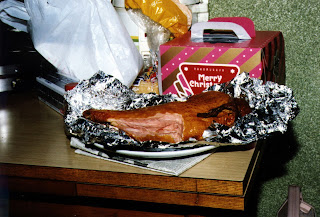 Sometimes, our evaluations failed us. It looked like a duck, walked like a duck, but, man, it was not a duck. This was something which revealed itself to us during our first Christmas. No, we weren't trying to eat duck. We were looking to eat turkey.

We went to local markets and there was no joy on the turkey front. Even by the time we left Japan in 2013, it was very hard to locate such birds. Japanese people don't tend to eat them and they are too enormous to fit in most small Japanese ovens. We checked out KFC, and the answer to our needs appeared in the pictures on their menu. There was what looked like a large, roasted turkey leg. Hurrah!

We purchased the "turkey' and took it home for Christmas dinner. We also picked up a tiny Christmas cake (note the box behind the leg). After peeling back the foil and catching the aroma, something seemed very amiss. It didn't smell anything like turkey or even chicken for that matter. In fact, it smelled very much like ham. A taste showed that, despite all superficial appearances, we'd bought ourselves a bird-leg-shaped hunk of ham.

At that time in my life, I was not eating pork. The truth is that I still eat it rarely, but I was avoiding it entirely at that time so that meant I wouldn't partake of this repast. I do recall that, even if I had been forgiving of its porcine nature, I couldn't have bore the intensely sweet and smokey flavor. It was the most flavor-intense ham I'd ever tasted and I passed entirely. 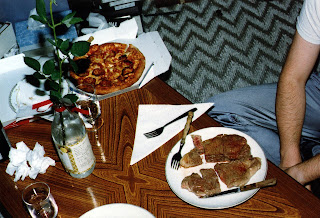 The next year, we were so "scared" of buying the wrong thing that we completely gave up on anything resembling our own traditions. In order to be safe rather than sorry, we went for steak for my husband (as I don't eat beef) and a tiny little pizza for me. It ws somewhat deflating, but we had years ahead of us making the best of things rather than following our old family customs.

Over the years, one of our enduring difficulties was finding food which was appropriate for festive meals while living in Tokyo. When the Foreign Buyer's Club made turkey available, we often bought a turkey roll which they had available that was small enough for our oven (it was a de-boned turkey which had all of the rest of the bird intact - you'd be surprised how small it gets when you remove all of its supporting infrastructure). Now that we're back in the U.S., it seems almost too easy to get anything we want to eat. Of course, that applies only as long as "anything" isn't something Japanese. ;-)

Merry Christmas to all of my readers. I hope you have a lovely holiday.
Posted by Orchid64 at 8:00 AM