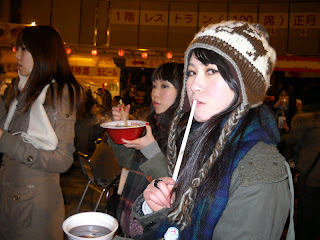 When I first came back to the U.S., I felt completely outside of the culture. When people around me spoke to me, I felt as if they were invading some invisible bubble of privacy that they should have detected and respected. I felt this way because, in Japan, I spent so many years being an outsider who was observing from a sense of separate space and a unique perspective that it felt odd to not be in that place anymore.

The truth was that being an observer granted me many things psychologically. It made me hyper-aware of my surroundings so that I sensed everything more acutely. It made me emotionally detached from what occurred in them such that I was much less rarely activated by things. It was insulating and made me feel protected. People were less likely to overhear my conversations and try to insinuate themselves into them. They were less likely to bother me at all.

After near one and a half years at home, I feel far too "integrated" with my surroundings. In some ways, this is good because I feel less alien in my home country, but in other ways, it is bad because I feel as though I'm sleep-walking and not heeding the details of life around me.

In many ways, I miss the benefits of being an observer in Japan.
Posted by Orchid64 at 8:00 AM

Email ThisBlogThis!Share to TwitterShare to FacebookShare to Pinterest
Labels: observer, psychology, will miss