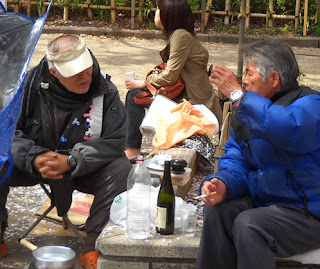 OK, I realize this is going to be a weird one, but it does say something about Japan and America. In the U.S., I see an inordinate number of men with shaved heads. Why? Well, some of them actually look great with a smooth head - like Avery Brooks looked much better without hair than with it (and he actually had a full head of hair). Most of the men I see*, however, are trying to hide their male pattern baldness by shaving all of their hair off. I blame Bruce Willis for this trend, and I think it says something about rejecting your body and natural appearance not because you think you look better, but because you're embarrassed by your bad luck with genes. The ones who don't shave their heads tend to run around constantly with a baseball cap on and that really isn't a whole lot better.

In Japan, I saw plenty of men with male pattern baldness and I felt that they lived more with their natural state of being. Rather than try to cover it up in embarrassment by adopting a look which makes them look like everyone else, they looked their age. I miss this sense of people living with the cards they inherited rather than trying to hide them.

*I realize that I'm living in a particular part of the U.S. and other areas may have different styles. I'm in Silicon Valley, and I have very rarely seen a semi-bald pate here.
Posted by Orchid64 at 8:00 AM