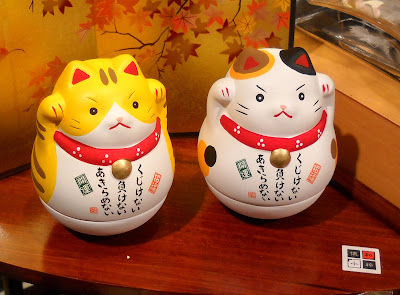 Before I went off on an extended tangent about my coworkers, I had mentioned that the company I had been working at, the darling of Mr. O., had been sold to someone who couldn't recognize a pig in a poke when one was wriggling around in front of him. I say that because business had been slowly tanking since I'd joined the company.

It was nearly a decade of solid decline in sales and a shrinking client list that caused Mr. O. to decide to put his baby on the market in the first place, but he sold it to a subsidiary of Nova ICI (the company famous for its owners disgrace and for treating the teachers at its conversation schools pretty shabbily) as an opportunity to gain our company's "know how".

Mr. G., which is what I will call the man who arranged to purchase our company, was interested in the materials and effort that went into creating a correspondence course that appealing to major companies. I don't know how Mr. O. danced around the fact that sales had been capsizing for a decade, but I'm sure there was a lot of selective showing of various books and name-dropping of major corporations. The idea that the company was being sold to a subsidiary of a major English conversation school struck terror in the hearts of all of the employees and my Aussie boss D. and I were no exception.

Our main concern was that Mr. G. would decide to replace all of the employees with staff that he knew from his office. Of secondary concern was the possibility that Nova's tricks to cheat employees out of wages and benefits would be imported. We were already getting screwed over on holidays as the president flagrantly broke the law and capped our vacation time at well below the legal first year mandated level of ten days and we imagined that this might mean we'd also be cheated out of part of our salaries as well.

It turned out that Mr. G did bring in his own staff, but he assured all of us that he wanted the entire old team to stay. In fact, he felt that he really needed us if he were to retain the very thing that convinced him to purchase the company in the first place - the "know how". He was more concerned about our quitting than we were about being fired and that was a relief to all.

Despite our worries, the new administrators swept a lot of the thornier aspects of our employment aside. When Mr. G. came in, he followed the law. He didn't change our salaries and both D. and I finally got the vacation time we were due. I went from being locked at five days off per year to receiving the full number that I was due - 20. What was more, no one was put out by the idea that I might actually take all of the days off that I was entitled to.

Beyond doing what was legal, Mr. G. ended up not being around very much. The president's office which oversaw our cubicles was now vacant much of the time and that eased up the well-heated summers that we had been enduring. With no president to dictate 84 degree heat blowing down on us in summer, we were free to set a more comfortable temperature.

There's an old saying about hitting yourself over the hammer. "Why do I hit myself over the head with a hammer? Because it feels so good when it stops." When Mr. G came in, I felt as if I had been hit on the head with a hammer for ten years and it felt so good now that it had finally stopped. The old president had been unfair, controlling, irrational, old-fashioned, and omnipresent. Having a president who did not micromanage, cheat, or watch us like a hawk felt like coming up for air after being held under water for a very long time. It wasn't that we were suddenly treated so well, but just that we stopped being treated so poorly.

Though these changes were refreshing and welcome, we still had to manage the personnel changes that were to come. Of greatest concern to D. and I was the foreign materials development person who was being imported. We were both concerned that he was going to slowly take over our work, but it turned out that was not going to be the case. The weird thing about it was that the two people who came in to work with us - one foreign and one Japanese - were not entirely new to me.

One of them was a teacher who I'd worked with at Nova before. His name was Steve and I mentioned him briefly in my first post in this series. No one was more surprised than me that he was still around in some capacity related to Nova, and his presence did nothing to inspire confidence in the rosy future of the company. (to be continued)