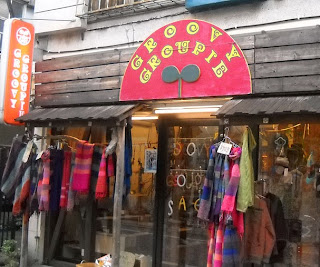 As the company's fortunes continued to decline, the necessity of having a third full-time employee started to diminish. When Amelia left, my final permanent (as opposed to temporary, not as in actually there "forever") co-worker was hired. This final fellow was another Nova language school (eikaiwa) refugee.

Scott was a very affable fellow who did not take himself or the job too seriously, mostly the former. That is in no way an indication that he didn't do the work. He did what was put in front of him without complaint, but he rarely got too worked up about all of the office antics and ridiculousness that went on around him.

The fact that Scott didn't take work too seriously in terms of how he approached it was revealed in what he told me about his time at Nova. Like many new teachers, he was scheduled to work on the weekends and hated working on Sundays in particular. When he didn't want to work, he'd simply call the head office on that morning and say he was sick. Of course, he wasn't sick. He just didn't want to work on Sunday. This happened so often that the people in the office came to expect his calls and recognize his voice. They'd say, "oh, hi, Scott", and anticipate what was coming.

When Scott did this, he wasn't paid the wages for that day of work, but this was before the days when Nova initiated economic penalties on teachers for short-notice calling in sick. I'm sure that people like Scott were a part of their rationale for instituting policies in which they'd dock teachers several hours of pay for being marginally late and requiring proof in the form of a doctor's note when a teacher claimed to be ill. I wouldn't be surprised, given how reactive the Japanese management could be, if Scott single-handedly didn't motivate this policy. After all, Draconian responses to single incidents were hardly uncommon in my experience.

Fortunately for us, Scott didn't hate working so much that he'd call in sick on a regular basis with us. The truth was that he appreciated the job as much as I did for the lack of face to face content. However, that didn't stop Scott from toying with the students at times, but not in the same mean-spirited and condescending way that John had. He mainly messed with them at his own expense by continually changing his personal data to elicit new and different questions.

On his profile sheet, Scott stated that his hobbies included watching movies, listening to music, and dance. When the students asked him questions about what sorts of these things he enjoyed, he kept things interesting for himself by giving different answers. Sometimes, he said he like Ska music, even though he didn't know what it was. He said his favorite actor was Harvey Keitel, but he didn't know enough about him to say which movies he'd been in and he at one point said he liked ballet even though he had zero interest in it.

Scott was someone who seemed to just fall into whatever he ended up doing. When I asked him about his former work, he said that he was a sports commentator for basketball for a local entity as well as a sports writer for awhile. We're not talking someone who was a Howard Cosell or even a Jack Buck. He was more like a glorified emcee at a high school basketball game. The odd thing was that he didn't even like basketball, but this was a job he could do so he did it.

Scott's real passion was writing. In fact, during his tenure at my former company, he worked on a novel by the name of "The Man With the Golden Penis". I had a tendency to make fun of Scott for his goofy demeanor and speech habits, so that was one that I couldn't pass up and I'm sorry to say that I perhaps had a little too much fun with this easy target. He allowed D. (the manager) to read it, but understandably had no interest in allowing me to take a gander at it. I wasn't exactly offended by this and D. pronounced the work decidedly odd.

I don't know if Scott ever finished this work and published it online or through a personal publishing house, but I can say that someone with his name has done some baseball writing. I can also say that I'm too afraid of the search results if I use the words "golden penis" to see if his novel ever made it online.

In terms of his telephone relationship with students, Scott dealt with them relatively respectfully and he didn't take the job too lightly, though he did have some ways of talking about the students which were unique and apt. One of the problems that all of us instructors struggled with when we did phone calls was that they would insist on calling us by "Mr." or "Ms." plus our first names.

Time and time again, I would hear Scott wrestling with a student who would call and ask to speak to "Mr. Scott". He's say, "just 'Scott', no "Mister". He's say this two or three times and give up. On one occasion, the student, after saying, "Mr. Scott" several times and hearing "just Scott" in response, finally said, "just Scott!" At least it was better than "Mr. Scott". After such episodes, Scott would say that sometimes talking to the students was "like talking to a dog". They just seemed to lack the ability to comprehend what was being said, even when their textbooks and pre-telephone lesson training materials primed them to do the right thing.

Scott lived with his Chinese girlfriend who worked as a dental hygienist and one of the weirdest misunderstandings that I ever had with him occurred over a discussion that related more to Jolene's situation and that of other coworkers I'd known that his. D. and I were discussing the hardships of cross-cultural relationships and how they presented particular challenges that must make life difficult for those involved in them. At one point, Scott said with great agitation, "now that's enough!" Apparently, he thought that we were trying to send him a message and he and his girlfriend weren't going to work out. The truth was that his situation was nowhere in our minds at all.

The president, who could be incredibly mercurial and unpredictable about how he regarded the foreign employees, liked Scott quite a lot. I'm not sure if it was his affability, his goofiness, or the fact that he was tall, but Mr. O. liked him and let him do things he wouldn't allow other teachers to get away with. One day, Scott sat in his booth and surreptitiously tried to eat a banana because he was hungry. The president noticed his attempts to hide his eating and said, "Eat, eat!" This was in stark contrast to what the big cheese said to another teacher who he docked 10 minutes of pay from for having the audacity to eat in his cubicle.

I can't recall exactly how long Scott was with us, but I think it was either a year or between a year and two years. He decided to head back home to Michigan and try his luck at finding a career there. This created a bit of an issue for him because his girlfriend had a great deal of difficulty going to the U.S. with him. He got in touch with us about a year after he left and told us that, even if he married, she wouldn't have been allowed into the country because the doors were not open wide for Chinese immigrants. I have no idea what became of their relationship, but I did feel bad that two people in a legitimate relationship were being kept apart by immigration laws.

Scott actually returned to Japan to visit and popped by our office. He used to wear glasses, but had lasik surgery, so he came back with two fewer eyes than when I last saw him. I think he might have liked to return to the company and work again, but it had shrunk in size sufficiently that they no longer needed more than my presence as a permanent instructor. The last I saw of a now glasses-less Scott was at our old office as he bid us goodbye and headed out back into the city. Like all of my former coworkers, even the ones who hated me, I attempted to track him down, but have not had any luck yet. I'd like to think he married his girlfriend and found a career suited to his particular talents and nature. The world needs more affable goofs and they deserve to be rewarded. (to be continued)

Update: I contacted Scott via Facebook and he did marry his girlfriend and essentially has lived happily ever after with a 12-year-old daughter and is running his own business along with his wife. I'm always pleased when someone who deserves a happy ending gets one!