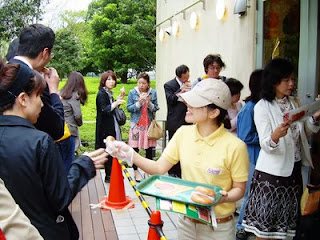 While waiting in long lines at Krispy Kreme in Japan, someone would often come out and hand a free fresh donut to folks in line. I thought that was pretty cool in Japan because it was not common to receive things for free. I didn't know that, in America, getting things for free is far more common and that what you can get is much, much bigger.

Since coming back, I've discovered that you can get a ton of things for free from full-size products to magazine subscriptions. It goes without saying that free samples are extremely easy to come by. It's also the case that a plethora of freebies can be had at fast food places, coffee shops, and, yes, good old Krispy Kreme. Several times a year, you can score a donut or a dozen from them during the holidays or just plain because they seem to feel like it.

Given how much more freely American companies offer freebies, the free donut in line at Krispy Kreme Japan takes on a quaint nature as a rare example of corporate largesse, but it does pale in comparison to the freebies you can get in America. It turns out that I actually don't miss this point, because it's only a rare thing within the context of Japanese culture.
Posted by Orchid64 at 8:00 AM