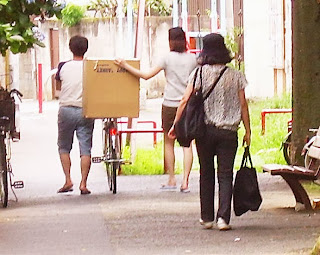 While living in Japan, I got used to schlepping around a heavy backpack when I went shopping. Things were generally pretty small, but there were times when I'd go to the local Utakaraya market and buy a small melon, a package of chicken, a liter of milk, a head of lettuce, and four bottles of soda and find that my pack suddenly weighed as much as what felt like a couple of bowling balls. Fortunately, the walk home was relatively brief so I could manage it.

Since coming home, I've still endeavored to walk to the shops, but it is very much harder here for a variety of reasons. One is that economies of scale, buying in bulk, and in quantity are much better. If I want to buy soda, it's much cheaper to buy a 24-pack than individual bottles. What I carried in Japan was nothing compared to attempting to carry such things here.

While I do recall having times when I felt like a weighed-down pack mule in Tokyo, I now find that the hard part seems a lot less difficult in comparison to trying to carry much of anything home from stores here. I'm sure that, if I returned, I'd once again recall what a hassle it was to try and fumble along with a large, heavy, or bulky package, but I've largely forgotten how troublesome it could be.
Posted by Orchid64 at 8:00 AM