Will Miss #39 - dressing up for the girls (reflection) 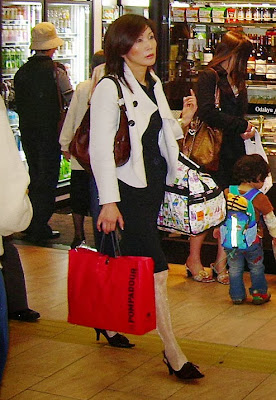 Last weekend, my husband and I walked around a local mall and I made a conscious effort to not sleepwalk through the experience. When we first returned, I took note of people and what they did and how they looked because I was trying to acclimate to the culture again. Over time, I've come to do what most people do - tune everyone out.

I'm not sure why I decided to attend to what I was seeing, but it was fortuitous because I am reviewing this particular post this week and can say something about how different this particular cultural aspect is. In Japan, I always knew when my female students were meeting their girlfriends for shopping when they had lessons because they often dressed to the nines. They often dressed up more for the girls than for the boys in their lives.

I do miss the way in which women took greater pride in their appearance, particularly when they were with other women. It says something about values in the U.S. when women dress well for men and not for other people. You can reach your own conclusions about that.
Posted by Orchid64 at 8:00 AM

Email ThisBlogThis!Share to TwitterShare to FacebookShare to Pinterest
Labels: clothes, reflection, will miss