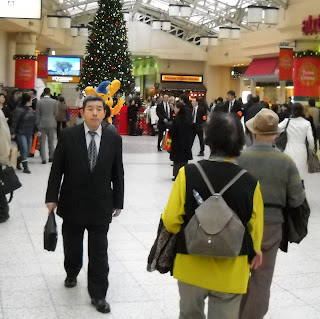 It was much easier getting to know foreign coworkers than the Japanese ones for a variety of reasons. The primary one may seem to be language, but it was far from the most limiting one. The main issue was that we did not work much together and that we were on different schedules. The foreigners were on 11:00 AM-7:00 PM and the Japanese, ostensibly, 9:00 AM-5:00 PM. They had lunch while we were just getting started.

Since there was no natural way in which we could socialize with our Japanese coworkers, it took many years to get to know the ones who went the distance. While we hear a lot about Japanese workers loyalty, the truth was that only two male workers were there for the entire twelve years that I was at the company. In fact, the most senior people at the company to this day are those two men and my former manager, D., an Australian. If you measure time served as a function of devotion to the company, he's right up there with the hardiest of my former Japanese colleagues. As I've mentioned before, some of them moved on to greener pastures, but many of them "quit" in the best interests of the company (aka they were fired).

The first Japanese staff member that I spoke to was Mr. Saito. He was present at my interview and seemed to be trying to find ways not to get me hired. Every question he asked seemed designed to point out my lack of experience in critical areas such as not having directly worked with businessmen on a regular basis. I will never know if this was just his way of conducting a shrewd interview or if he really didn't want me there, but he was to become the Japanese staff person that I worked the most with and knew the best.

That last sentence in no way should indicate that Saito and I became friends. By virtue of the fact that he was the Japanese manager of the English materials section, he simply was the person D. and I had the most contact with. Saito was a classic example of a Japanese businessman in many ways. He wore the proper dark suits and ties. He was physically indistinct for a man of his era - a bit short with a petite physique. He rarely called in sick or took much in the way of vacation time, showed proper deference to the shacho (president) at all times, and worked late.

Saito was a nervous sort when it came to his job. He had ended up in a small company with few chances for advancement and had a skill set based almost entirely on serving that one particular company. This situation is one that is extremely common in Japan and a huge part of the reason why the labor force is greatly less mobile than that in the U.S. or other Western countries. While we hear lots of talk about "loyalty", a fundamental truth is that most workers are groomed specifically to deal with their companies and other businesses tend not to want them.

Saito was sure that, if he had to leave the company, he'd never get a job as good as the one he had so he did absolutely everything he was asked no matter how much he hated it or how unfair the request was. In fact, I later learned that Saito started off as a salesman and was transferred into the English materials development section against his wishes. He complied, and they asked him to do it because his English was better than any other person currently on staff who was not already in that section, but he didn't want to be writing text books, proofreading, and doing translations.

Saito knew that he wasn't qualified, but the company preferred to shuffle the players they already had around than to recruit new ones who were more capable. This, too, is common in Japan. They hire workers and move them around to various sections even when their skills lay in a particular area. Rather than build great text developers or fantastic salesmen, they'd rather breed a mediocre jack of all trades.

It wasn't just tiny companies like mine who did this, but major corporations like Honda and Sony do this as well. It promotes a certain amount of inefficiency, but insures "loyalty" by making employees good at being at their company rather than good at one particular thing. It keeps the labor market from seeking higher wages based on higher skills.

It wasn't that Saito loved sales so much as he lacked confidence in his abilities. He soldiered on, but he was relieved when the company's tanking fortunes shrunk the materials development section and he got transferred back into sales. Once he no longer worked with the foreign staff and felt he had to oversee us and fret over inconsequential details like whether or not our red pens had enough ink to make corrections look dark enough on student reports, he loosened up and I got to know him a bit better as a person.

Though Saito seemed like an enormous straight-laced dork, he was actually very much into rock and roll music. When he found out I had been an enore told me that he liked KISS's "simple rock music" and he played the keyboards at home. In fact, I gave him one of my old Macintosh computers when I retired it because he was into MIDI at the time and couldn't afford a computer that would let him work with it. This "donation" stunned him because he perceived it as incredibly generous, but the truth was that it was such an old thing that I couldn't sell it if I wanted to.

I should make it clear that Saito wasn't paid less than me - far from it. The difference was that he had bought a condominium and he and his wife, who worked part-time, were on a budget trying to get it paid off as quickly as possible. They didn't have any children, and in fact it was through him that I learned why a plastic storage box I had was called a DINKS* box, but I think he was all too well aware of the relative insecurity of working at our company. If he got laid off or forced to quit, he knew they'd be in enormous difficulty so he lived as simply as possible, including growing his own potatoes in a little garden that was a part of the condo deal.

When you look at most Japanese businessmen sitting on trains or walking in blue- and gray-suited masses in the more crowded areas, it's easy to reduce them to the worker drone stereotype. You imagine them being formal and professional, working late at night, and being deferential to bosses. It's easy not to assign them the thoughts and feelings of a normal person because they seem so polished and together on the surface - or at least they do if they aren't getting home from a bender and falling asleep on the train or upchucking on the platform.

Though Saito fit the stereotype of a normal Japanese businessman in every way, I got to see many of the little human cracks and quirks through time. This is no easy feat because most Japanese people hide who they really are when they're on the job and they push foreign workers in many cases to comply with rigid rules such that you start to feel they are no more than their jobs. Though they may not show it, many of them are just as real, possessing of complexity and depth, and afraid of bad things happening as you are. Saito didn't dye his hair yellow and hang out in Harajuku, but he did have his own personality. It was just usually hidden behind a mask when he was on the job. (to be continued)