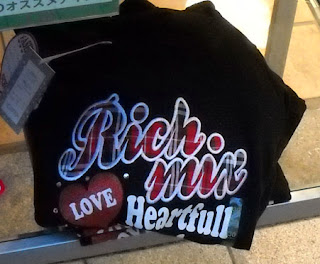 I used to receive an actual newspaper when I was living in Tokyo. When it rained, the paper always was delivered in a plastic bag. This is not too far outside of the realm of reasonable service, but I found that there were other areas in which care was taken that I'm not noticing happening here in the U.S. In particular, when a parcel arrived damaged via the Japanese post office, they would put it in a plastic bag as well to make sure that the contents didn't fall out. Here in America, I've already received two empty padded mailers because the contents got lost. I never lost the contents of a package once in Japan, and I received a lot of packages.

In Japan, the focus on service in general often created a habit of going the extra mile without the customer even asking for it. I'm disappointed since returning to the U.S. to find that people only tend to do what they have to unless it is a particularly expensive service dealing with well-heeled customers. I miss the way the Japanese businesses looked out for their customer's interests even when they strictly did not have to do so.
Posted by Orchid64 at 8:00 AM

Email ThisBlogThis!Share to TwitterShare to FacebookShare to Pinterest
Labels: service, will miss