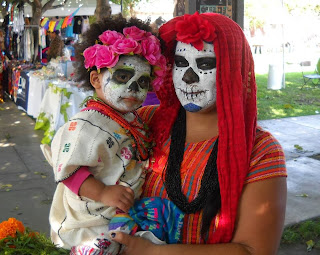 Japan has a rich culture with a lot of variety and history. In fact, you could not really understand every nook and cranny of what it has to offer even if you had a lifetime to explore it. What is more, much of the culture has been adapted from other cultures - Chinese and European ones in particular - so there is a bit of a crazy quilt going on. That being said, it is one unified quilt and every square has been crafted in accord with what the Japanese find comfortable and secure.

In the U.S., at least where I am living now, there is cultural diversity everywhere. In my former apartment, my nearest neighbor was a a Chinese family. Now, the neighbors on either side of me are Indian, the property manager is Hispanic, and the downstairs neighbors are Chinese. There are even a few white people on the other side of our building and a few black ones in the building opposite ours.

The thing about being in America is that there is a lot of authentic diversity and you can, if you live in a relatively well-populated area, attend festivals and cultural events given by people who are a part of those cultures. Since returning, I've been to Japanese and Portuguese cultural events as well as taken part in a Dia de Los Muertos (day of the dead) procession. I'm hoping to locate a Diwali (Festival of Lights) event next year (I missed out this year). My point is that I can do these things because the cultural communities are strong here and well supported. In Japan, such things were much smaller, harder to find, and not well-attended. People of different cultures are discouraged from embracing their native cultures and celebrating them. They are pushed to be quiet and blend in.

I don't miss the lack of cultural diversity in Japan.
Posted by Orchid64 at 8:00 AM