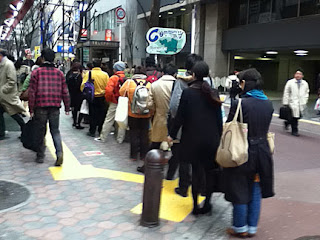 There are interesting contradictions in all cultures. One in Japan is that they expect people to follow "rules" even when they are not in writing or something that people are not contractually bound to do. At the station, personnel will be organizing people into lines, telling them where not to stand, and generally ensuring order even though nothing compels them to do so. Of course, people comply without question in 99% of cases.

In America, every rule has to be put in writing or in a contract or people won't even consider following it. The strange thing is that people will see a directive on a sign or sign a contract promising not to do something, but they'll do it anyway and protest when told that they are breaking a rule. There are many examples of this, but one of the easiest to spot are the people who go into express lanes that prohibit more than "X" number of items with far more than "X". They ignore the signs, but what is worse is that the store personnel do not enforce the laws. If they do, the person who breaks the rule sometimes gets belligerent. There is no consideration for others in either the rule breaking or the lack of enforcement.

I miss the way people in Japan generally had enough consideration to follow rules and, when they didn't, someone in a position to get them to comply actually enforced the rule.
Posted by Orchid64 at 8:00 AM