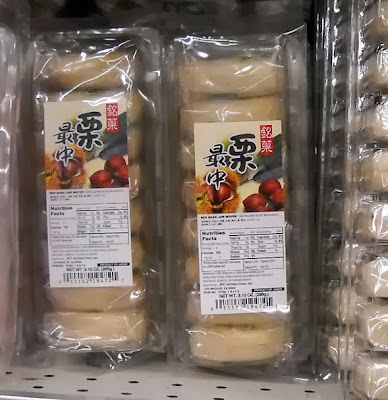 There are chestnuts on the package. I'd probably consider this even though it is monaka.

"Monaka" is often described as filling, usually sweetened beans, inside of a "wafer". I don't know about you, but when I think of a wafer, I envision sugar wafers with their light crispy blandness providing texture to evil creamy filling. I don't think of something which resembles thin Styrofoam packing material.

Though I didn't hate monaka, I always felt like it was one of the least appealing containers for Japanese sweets. The texture was always a bit on the chewy side and it really was like a stale cake cone. Perhaps freshly made ones were better and the shelf stable things I bought and consumed on occasion were victims of moisture absorption that could not be staved off no matter how many little packets of oxygen absorbents were put in them. I don't miss monaka.
Posted by Orchid64 at 8:00 AM