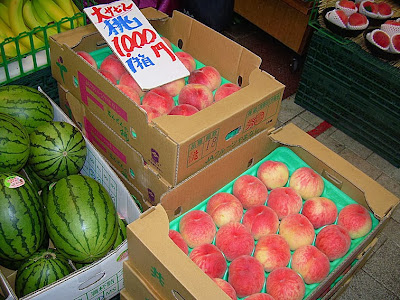 Ozzy Osbourne once talked about how he didn't understand the need for lavish Christmases with lots of gifts. He said that, when he was a kid, they got a stocking with an orange and a few walnuts in it. Those of us who grew up in a global age (or close to the coming of it) may see a child who receives such things as one step removed from getting a lump of coal. The truth is that, in the past, people didn't have access to fresh fruit in the winter and an orange was seen as a lavish treat. We take for granted the availability of produce nearly year-round, but it was not always so. To us, seasonal fruit is cheaper, but it doesn't mean it's totally unavailable for most of the year.

I grew up in a rural area in the 70's and our situation wasn't quite as limited as Ozzy's, but it was close. Because of this, I'm surprised at the plethora of options I've found since coming to California including the type of white peaches that I didn't expect to find here. That being said, I've noticed two things about all peaches I've encountered here. One - they are rarely, if ever, sold in a ripened state. Two -they are actually more expensive than those I had in Tokyo! So, while I can get white peaches here, I miss the cheaper ones that were sold closer to a state in which I could actually eat them that I could get in Japan.

Note: I made a mistake with last week's posts and made two "won't miss" posts so this week I'll be making two "will miss" posts to get my balance back. ;-)
Posted by Orchid64 at 8:00 AM