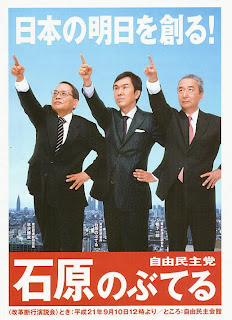 MacArthur famously called Japan a nation of children. Over the years, this has been interpreted in various ways and one cannot know what he truly meant by this because MacArthur wasn't called on the carpet for this ethnocentric and possibly racist remark. He was around in the day when the press didn't dissect everything or grill the speaker for saying idiotic things.

I can see, to some extent, why someone may say such a thing, though I believe it's a gross misrepresentation of something which I observed in Japan. That is, there is a certain naivete which can be sweet or sour depending on how it manifests, which is a part of the culture in Japan. I think it's part of being a small country of people who perceive the rest of the world through a particular filter. It can make them look like unsophisticated dorks to outsiders because they don't possess the perspective that says it's not "cool" or "mature" to do a certain thing. It's actually a type of innocence and it sometimes results in things like the ridiculous political ad pictured above. These guys don't know they look silly, because they are lacking the sort of perspective that tells them that this is so contrived a pose that they look silly. Just as a kid deeply absorbed in a role play such as pretending to be a superhero or a cowboy may be oblivious to the way adults may find him amusing, sometimes Japanese politicians are unclear on how funny their presentation is.

I miss these political ads both because they are funny from my point of view and because they do reflect something which is rather unironic and, yes, even "innocent" about Japanese culture. In America, we're all so concerned about looking like enormous dorks that we examine our presentation and make fun of the way others offer themselves. Sometimes, I think we could do with a lot less of that and a little more of politicians goofily pointing at the sky as if they were looking to the future.
Posted by Orchid64 at 8:00 AM