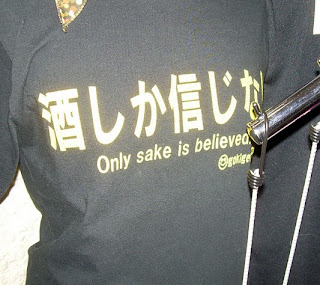 Twenty-five years ago, I told my future husband that I objected to drug use. At that time, he thought I was being judgmental, moralistic, and small-minded because that's why most people have an issue with it. The truth is that my objection has nothing to do with morality. It has to do with what is often referred to as "presence". That is, when I am with people, I want them to be mentally "with" me 100%. I don't want them to be under the influence of any mind- or consciousness-altering substances. I want them to be fully themselves. If they can't manage that when I'm with them, then I don't want to be around them.

In Japan, drug use is far less common than it is in the U.S. because the culture is much more reactive about it. While I don't believe the reefer-madness-like response to "soft" drugs, I generally think that a society is better off without so much drug use. The reasons for this stem beyond my desire not to be with people who are only half with me, but also relate to the fact that drug use tends to bring a whole host of other problems along with it. I also strongly believe that, if we turn to substances, we never truly manage to manage our inner lives because we run from our issues rather than face them.

Frankly, I'm tired of the debate with people in the U.S. who snarl like rabid dogs at the idea that drug use is anything but a great thing as long as we're talking about whatever drug(s) they happen to favor or use. I miss the fact that Japanese people in general didn't use drugs and saw their use as a far from positive thing.* There were certain arguments I never had there, and this was one of them.

*It is not lost on me that Japanese use alcohol in the way many people use drugs. The main difference is that I knew exactly how to avoid it, and most people experience drunkenness as a continuum - drug use tends to have more binary results - high or not high.
Posted by Orchid64 at 8:00 AM

Email ThisBlogThis!Share to TwitterShare to FacebookShare to Pinterest
Labels: debate, drug use, drugs, will miss