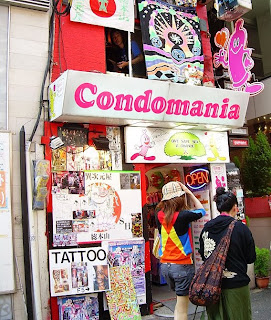 I don't know if there are programs in Japan in which high schools distribute free condoms to teens to control unwanted pregnancy and the spread of disease. I am pretty sure, though clearly I cannot be certain, that such programs would not be debated based on religious concerns if they were proposed. They almost certainly be pondered in terms of expense (who pays) and the potential embarrassment that would follow offering such private items to kids. In the U.S., some schools do offer condoms, but some do not because there is too much blowback from people who believe that it promotes promiscuity among the hormonally charged youngsters.

I continue to miss the fact that the Japanese have a more enlightened attitude toward birth control (though not necessarily sex itself, but that is a topic for another post) and make it relatively easy and morally acceptable to seek it out.
Posted by Orchid64 at 8:00 AM