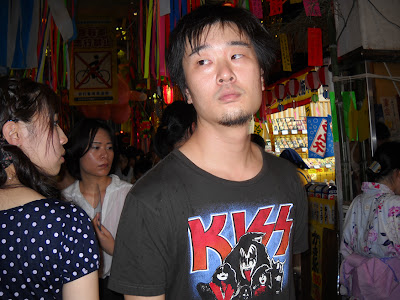 He's probably not even a KISS fan.

One of the drawbacks about people who live in cultures with a great emphasis on individuality is that the people who comprise that culture often don't know who they are or what they define themselves by. This results in people defining themselves by trivial matters such as the soda brands they drink, the sports teams they follow, political party, choice of computer platform, or the musicians they favor. They define themselves by a plethora of external factors which really have little to do with who they really are because their cultures don't offer a solid definition. In Japan, people are defined by their characteristics as Japanese people and generally do not identify as strongly or personally with trivial external factors. You're quite unlikely to encounter a Japanese person who will judge you poorly because you bought a Macintosh and they own a PC or who will get angry with you because you express dislike for a musician they love. I wish I could say the same for people back in the U.S., who, at times, are inclined to foam at the mouth when you say something about loving Coke when they love Pepsi because it's not a knock at a brand of beverage, but rather a shot at who they see themselves to be.

Most Japanese people's identities aren't so mired in such things so they don't take these impersonal factors personally, and I'll miss that.
Posted by Orchid64 at 8:00 AM