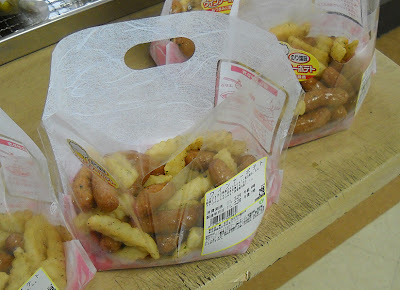 Even the frozen French fries are better in Japan because, you know, they mix them with mini-weenies.

Upon returning from a trip to Hawaii, one of my students asked me if I thought Japanese watermelon was sweeter than American watermelon. My truthful reply was that I've had sweet melon in both countries and relatively tasteless stuff in both of them. I've probably had more so-so watermelon in Japan simply because I've been an adult here longer and bought more of it. My student looked shocked at this reply and said that she really thought Japanese watermelon was "better". I will grant one thing; Japanese watermelon has a different taste and smell. It's not "better", but is absolutely "different". It's like American and Japanese pumpkin. Both are good, but have unique properties and need to be prepared differently to suit their strengths, but Japanese people are always telling me that all things Japanese are superior to all things American.

The bottom line is that we tend to like things the way we're used to them. It's entirely subjective, and it's tiresome hearing people say that everything from the food to the furniture design to the way in which people communicate is "better" in Japan than America, and I won't miss it.
Posted by Orchid64 at 8:00 AM