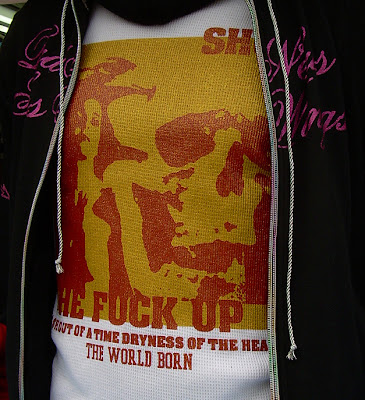 The obscured word is "Shut".

Sometimes I wonder if my most ardent stalkers realize the risk they take with their hostile e-mail messages and the trollish responses that they make as they follow me to every site I comment on around the web. If anything untoward were ever to befall me, from a robbery to an attack to an unfortunate fatal accident, the first finger would be pointed straight at their I.P. addresses (which I have a growing collection of). The Japanese police, who do not do forensic research or investigations so much as decide who committed the crime and then coerce a confession out of the "guilty" party, would then arrest the errant stalker and they'd be in the pokey for the crime whether they committed it or not. This potentially gratifying outcome aside, the fact that this happens in Japan has been a source of concern for my husband and I throughout our stay in Japan. We live with a certain paranoia that if we were to ever be unfairly fingered for a crime we did not commit, we know that various unpleasant techniques would be employed to force us to confess. What is worse is that the Japanese populace, by and large, believes that the police only arrest the guilty and therefore do not question this practice.

I won't miss this nagging worry that if the police decide my husband or I broke the law, we'd be browbeaten down and placed in jail for something we did not do.
Posted by Orchid64 at 6:29 AM