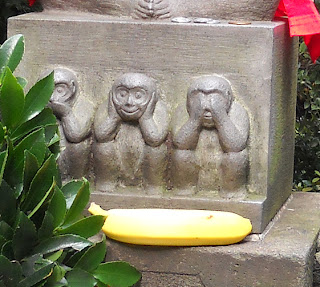 I always get gawked at in public because of my appearance. Though I don't like seeing people do triple takes when they see me and just have to look back again and again, it's usually just basic rudeness. When my husband (who is also American) and I are out walking around, we, rather reasonably, speak English to each other. It's important to say here that we are not loud talkers. We speak at a reasonable volume, certainly no more loudly than other people having conversations and a good deal lower than more raucous groups of Japanese people or those on cell phones. However, when we speak English to each other, occasionally someone (usually a man), will whip his head around as if an insult had been lobbed like an errant glob of expectorant at the back of his head. A malevolent look, sometimes for the duration of our remaining in each other's presence, is directed our way. Recently, we were subjected to about 9 minutes of nasty looks and disgusted sounds for speaking to one another in the presence of a particular man while riding on a train. It's as if the very act of speaking our native tongue to one another is unspeakably inappropriate behavior and our insistence on continuing to engage in such behavior incites rage on the part of the offended party.

I won't miss people who think I've engaged in some sort of horrific social faux pas for having the audacity to speak my native tongue in public when having a private conversation with my husband.
Posted by Orchid64 at 8:00 AM