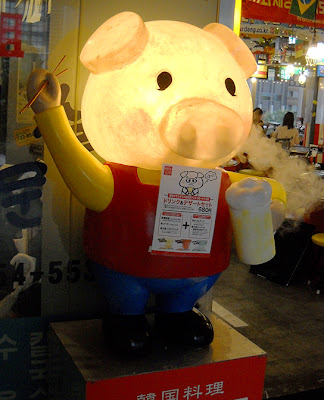 One of my students has a brother who lives in San Diego. He has gained 15 kg. (33 lbs.) in two years due to eating American-size meals. I suggested that he not eat everything he is served and prepare his own food more frequenlty, but she wasn't having any of that sort of crazy logic. No, it was the American food that was the problem, not his laziness about cooking or inability not to gobble down every morsel placed in front of him. I frequently hear students whine about how over-sized food servings are in restaurants in the U.S. No doubt, the portions are too big and this is linked to a cultural perception in the U.S. that value is linked to quantity. However, in my experience, they're too big in Japan as well at restaurants (at least in terms of carbs) and I manage this by simply not eating it all.

I won't miss hearing Japanese people complain that portions are too big in the U.S. when they eat it all up of their own volition (and they usually do, as if it were some challenge they had to meet).
Posted by Orchid64 at 8:00 AM