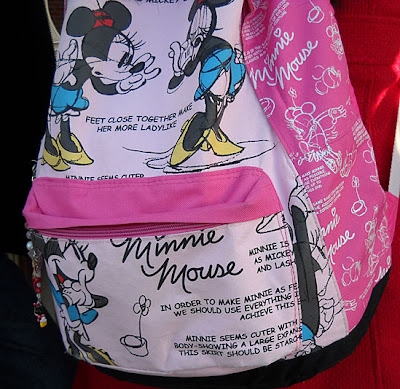 I can't exactly show a bunch of bits flying through a phone line, but I can show this bootleg Disney backpack.

One of the down sides to living in a foreign country, as I've mentioned before, is that you aren't in touch with the pop culture back home. It's not the least bit uncommon for me to be on a Skype call with friends or family and have people talk about how much they enjoy a T.V. show which I have never heard of, and I feel out of the loop and like I'm missing something. Fortunately, one of the things you can do in Japan with little fear of retribution from your ISP or legal entities is pirate television shows via Torrent sites. Back home, such behavior wouldn't be necessary because those shows could actually be watched there. In Japan, well, you have far fewer options aside from waiting until an entire season has ended and buy a DVD set (something which my husband and I tend to do with shows we've downloaded and enjoyed) and play it on your region-free player.

Japanese ISPs tend to look the other way about this particular behavior as long as one is not completely egregious with downloading, and while it's not an admirable thing, it is something that I will miss having the opportunity to do when there's a T.V. show I wanted to see and have missed the initial airing of.
Posted by Orchid64 at 8:00 AM