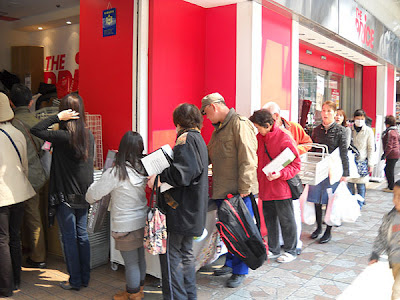 I understand that there are long lines everywhere at popular attractions around the world. This is a given and Japan's long lines at places like Tokyo Disneyland are understandable.What is less understandable is the random long lines at little places at which there is no special product or limited supply. In the picture above, some sundry goods are being sold in front of Ito Yokado. There was nothing unique about them and the prices weren't spectacular, but there is a tendency in Japan for people to join a line simply because other people are in the line. I've spoken with more than one person who has said that they figure that, if people are lining up for it, it must be good so they'll get in line, too. Sometimes, I think that stores actually intentionally create lines in order to drum up business because they know about this attitude.

Sometimes I just want to buy something and move on and when the place I want to go to is afflicted with these sorts of lines, it can be very frustrating. I won't miss the random long lines at places at which it makes no sense for them to have a line.
Posted by Orchid64 at 8:00 AM