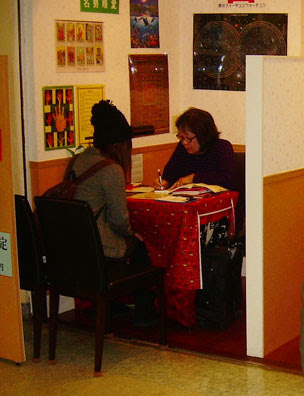 A fortune teller and her customer in a cubicle in the Nakano Broadway shopping arcade.

There are psychics or fortune tellers in nearly every culture. The main difference is not their presence, but how they are regarded and how their presence is made. In Tokyo, psychics are a part of everyday life. They have cubicles in shopping areas, sometimes in department stores. They set up little tables along the streets and await customers. Japanese people regard with varying degrees of amusement and seriousness. Some people think it's nonsense. Some think they have valuable information to impart and are willing to pay a lot of money to speak with the most popular ones. Most think that they are essentially entertainers and go to them for fun. A lot say that they believe what they want to believe when presented with a prediction for their future and discard the rest. A lot of Westerners have a smug attitude toward such people that borders on or blatantly treads upon scorn and disdain. That's why you rarely see such people out in the open and even more rarely see them serving their patrons in public spaces. It's just too embarrassing for the just-too-savvy-Western customers to let other people know that they're consulting a psychic in many cases.

I will miss the way in which psychics and fortune tellers have a place in Japanese society and the lack of  disdain with which they are regarded by people.
Posted by Orchid64 at 8:00 AM