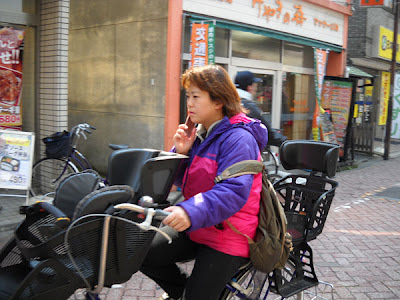 She looks like she's standing still here, but she was actually riding around with her phone glued to her ear.

I always loved the idea of people riding bicycles in a country instead of taking cars and originally, it was a great point about living in Tokyo. As the years went by though, things got to the point where both being a cyclist and encountering them became increasingly frustrating. Bike parking was made nearly impossible for more than the shortest time period and long term parking was troublesome as the desire for clearer sidewalks edged out accommodating cyclists. What was worse though was that cyclists became increasingly stupid and reckless with the advent of cell phones. It's technically illegal in most places (bike laws are different from area to area, even in the same city) to use a cell phone while cycling, but people do it all of the time and the police rarely (if ever) uphold the law and fine them.

Between their attention being divided and one hand being on the phone (sometimes sending or reading text messages!), such cyclists are a huge hazard and I won't miss nearly getting knocked over by those idiots.
Posted by Orchid64 at 8:00 AM