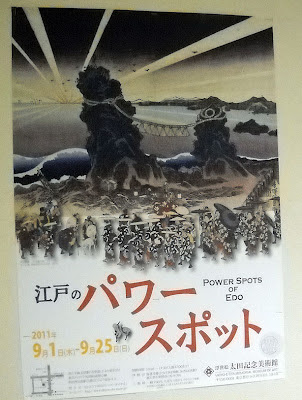 I'm all for New Age spirituality. In fact, I'm really pretty good with any spiritual belief system folks want to embrace. The thing I'm not such a fan of (besides pushing your faith onto others) is blatant expansion of a belief system in order to make a quick buck. That would include things like velvet Jesus paintings and the virgin Mary nightlights as well as power spots. The notion of power spots is relatively new, but it's a craze that has exploded in Japan in the 21st century. Japan seems to have more power spots than it has people to visit them and time and again students would tell me they'd visit a place, hold a wedding there, or housebreak their dog at some particular place because it was a "power spot". The basic notion is that you can go to these places to collect energy (perhaps mystical, perhaps otherwise) and that being in such areas is better in some fashion, but it really does seem that this is about tourism and people swallowing the idea that a particular area has some special draw.

Japanese people can't see, smell, hear, taste, or feel the power in a power spot, but that doesn't stop them from going to them and advocating that I visit them as well and I won't miss that.