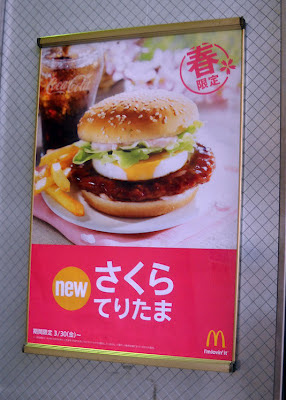 A "sakura teritama" burger. It's a ginger teriyaki pork burger with lemon sauce. The "sakura" part doesn't mean it's stuffed with cherry blossoms, but rather that there's a pale pink sauce which is supposedly infused with sakura flavor and it's like biting into spring. I'm not sure what spring tastes like, but there you go.

I try hard not to think something is strange because it suits Japanese culture, but not others. This is why I'm not clapping my hands together in girlish glee or extolling the adventurous nature of Japanese sweets and their supposedly "exotic" flavor. Peanut butter ice cream would be exotic in Japan. Kinako ice cream would be exotic in America. Both have fairly similar tastes and neither is exotic in each respective culture. That being said, McDonald's in Japan always came up with weird and strangely named burgers for their various promotions. I have numerous pictures of signs showing such offerings. Many of them, like a pasta croquette burger composed of cooked elbow pasta in a cream sauce, formed into some sort of mutant blob, breaded, and then deep-fried, are bizarre even by Japanese standards.

Though I never ate them (as I don't like fast food), I always got a kick out of the bizarre burgers that McDonald's Japan offered, and I'll miss seeing them.
Posted by Orchid64 at 8:00 AM