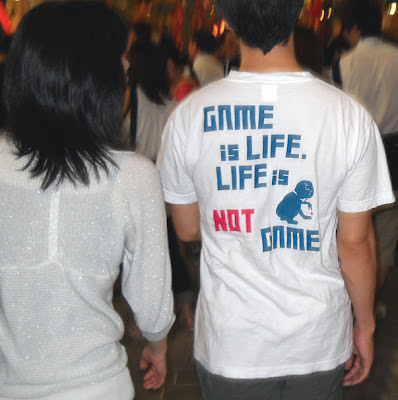 I once read an article written by a woman who spent three years in Germany and talked about how horrible it was for her to come home and face reverse culture shock. Though I don't want to engage in a reverse culture shock pissing contest, I have to say that it is hard not to snort derisively at the notion that three years in a Western culture is going to compare to the shock of returning after 23 years (the last 20 of which included no trips home for visits) in an Eastern culture.

Reverse culture shock comes in both big and small ways, and the truth is that I endeavored to prepare myself for it for quite some time. My husband and I have been talking about going home for the last 7 or so years and we knew we would not remain in Japan for the rest of our lives. When immigration officials offered us the chance to apply for permanent residency, we said "no", because we knew that wasn't in the cards for us. Though it may seem odd that we stayed so long, it was always intentionally on the "renewal plan". As an aside, upon returning to America, my husband's aunt sent us a copy of a letter that we included with our wedding invitations in which we said we were going to stay in Japan for "3-5 years". Nothing ever goes as planned, it seems.

In order to prepare for the inevitable departure, even when we were uncertain of when exactly it might happen, I attempted to divest my identity from that of being a foreigner in Japan. Part of that was carried out via this blog. It may seem strange that I would write about Japan to extricate myself from it, but fully digesting my feelings about it has been a form of catharsis. Talking about it has helped and continues to help me let it go. Continuing to talk about it may assist in fully internalizing and divesting from the experience through time. You don't "get over" reverse culture shock after more than 2 decades in the same place in a few weeks. I'm not even sure it'll be over in a few years. I can say that it certainly has not abated after a few weeks.

The initial stages of reverse culture shock can be recognized in the little things which you notice yourself thinking or doing which you've been doing on auto-pilot after years in a different place. For instance, my first trip into a public restroom at Seatac airport yielded several incongruous thoughts. I walked into the ladies room and first wondered if there would be a line (as there so often is in Tokyo) and whether there would be any Western-style toilets free. I even had the impulse to check the doors for the little illustrations telling me which were Japanese and which were Western.

Many little things also occurred to me before I left the airport. When my husband got coffee, I asked if he wanted an artificial sweetener packet as I carried them in my wallet all of the time in Japan. He smiled and told me he already got one, as they carry them in the coffee shop. American restaurants and shops usually have sweetener. Japanese ones do not. We bought a muffin and were surprised that it was so good and moist. Of course, most muffins are full of sugar in America and that gives them a better crumb.

Another small habit which is hard to break is the compulsion to make sure I have my wallet and identification with me at all times. Since I had to carry my gaijin card with me at all times in Japan by law, it was something I had to remember every time I put one toe outside of my front door. In America, I don't have to carry I.D. all of the time, but I still feel weird without it.

These incidental things are rather quaint and interesting as they show that thinking something again and again and again over many years conditions you to keep thinking them even when circumstances have changed, but these are not really the earth shattering things nor the essential essence of reverse culture shock. The true essence is psychological. You walk around and everyone understands every word you say and you understand every word they say. People overhear your conversation and make comments, offer advice or intrude on what you're saying. You feel exposed and uncomfortable after years of public "privacy" via linguistic differences.

We've also found ourselves uncomfortable asking questions about certain daily living situations because we don't know if our ignorance is reasonable or if we're asking about something which everyone who has living in the U.S. for a long time knows how to do already. For instance, in Japan, we knew how to charge and use Suica cards, but we don't know about the system for debit cards in the U.S. since people were still writing personal checks when we lived here. We also don't know the procedures for various activities which once included the presence of a human, like self-service gas stations that take credit cards and have no personnel at all or self-check-out at markets. These are not highly complex things, but until you've got experience, you can stand there investigating what the machine tells you in a way which is not natural for people who have been doing it for years.

My husband and I also are uncertain about how to interact with service people in America after years of dealing the style of service in Japan.  American service is often portrayed as being inferior to Japan's, but that's not true. It's different and the shock of it is not that people are not helpful (they are), but that they are seemingly too friendly and casual while they're helping you. After decades of dealing with formally polite people who kept a professional distance and had an almost robotic manner in which they handled customers, dealing with people who treat you as an equal, ask how you are, and infuse their customer interactions with individuality is discomfiting. Dealing with people who lack spontaneity over many years has the effect of removing some of your ability to be spontaneous as well. As part of my reverse culture shock, I have learned that years of acting as expected in order to better fit in with Japanese society has made it harder to act naturally in a society which is freer and more flexible. I've forgotten what "natural" is for me after so many years of acting in an artificial manner to make the Japanese more comfortable.

The biggest part of what has constituted our reverse culture shock so far can be summed up in an astute comment my husband made shortly before we left Japan. He said that being in America would mean we would be "heard", but not "seen" while we had spent our years in Japan being "seen" but not "heard" (even when we were speaking the language). We learned to operate in the environment based on the pattern of being noticed, but not listened to or understood. Now, we need to learn to operate based on being listened to and understood, but not noticed.

I think internalizing this difference in particular is crucial in readjusting to life back home. In Japan, I could get jobs more easily based on my hair and eye color as well as my gender. Here, I've got to earn a job with what I say and how I interact as well as my skills. I knew this well before I came home though I imagine living it will feel rather different than simply having an awareness of it at the forefront of my consciousness. There are advantages I had in Japan which I don't have here, not the least of which is that I am no longer part of a minority that is prized for superficial reasons. I've written before about how, for white folks, being in Japan is like being the prettiest girl at the party for the first time and getting a lot of unearned attention. Being home is like being part of the crowd that people don't pay particular attention to. Though I knew that this was coming, I'm not quite sure how to respond to the situation, but I'm figuring it out pretty fast. The long-term question isn't how to interact in my home culture once again, but how I feel about interacting in it. Only time will tell.
Posted by Orchid64 at 8:00 AM