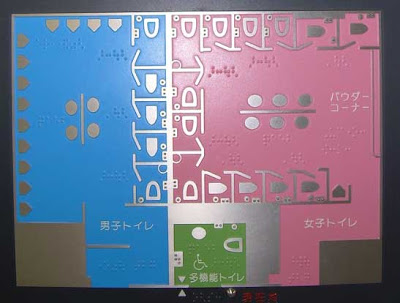 In this bathroom diagram from a train station, the solid toilets are Japanese-style and the ones with a hollow center are Western-style.
It probably surprises everyone that it has taken me 323 posts to get to the subject of Japanese toilets. They are often talked about (and reviled) by newcomers to Japan. What many neophytes don't know, but will soon realize, is that the Japanese also dislike squatting over these porcelain troughs in the floor to do their business. If there's a public restroom with a mix of Japanese and Western potties, the Western ones almost always fill up first. No one likes risking peeing on their shoes (or worse) or standing in the mess when those who used it previously missed the mark. The reason they persist despite the obvious preferences is obsessive concerns about cleanliness (having your bum touch the seat another bum has touched) and the fact that the Japanese toilets are easier to clean than the Western-style ones.

I won't miss Japanese-style toilets.
Posted by Orchid64 at 12:15 AM