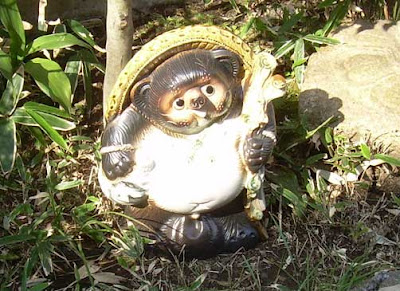 While it may seem that I like tanuki ("raccoon dogs") statues being present in Japan because it tickles my inner tittering juvenile nature, that's not actually the case. I like these statues because their presence says something about the Japanese people. It says that they aren't so hung up on seeing genitalia that they would nix the idea of putting a representation of an animal with a giant scrotum on their lawns. It's an indication that they aren't as prudish, childish or self-conscious as some other cultures which would have such a thing removed as an obscenity.

It says something about a certain type of maturity, and I'll miss that.
Posted by Orchid64 at 12:15 AM