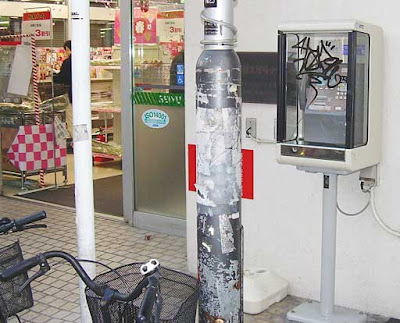 This post was hard to name because the idea is hard to convey. Let me start by saying there are relatively few pay phones left in Tokyo at all, and I need every precious one since I don't have a cell phone. This is not the thing I have an issue with. Technology marches on and it's not Japan's fault that I refuse to join the parade. The problem is many people who have cell phones seem to think that the best place to park and make a call is at or on the few remaining pay phones. There's nothing more frustrating than needing to use the phone only to find some jerk yammering into his cell right in front of it and refusing to budge (often leaning on it or putting some of his personal items on it). I think they do it because they believe a space for phones is an okay area to bark loudly into the phone, but I can't say for sure why it happens.

I won't miss these people who take control of a device they don't need for no compelling reason.
Posted by Orchid64 at 12:15 AM