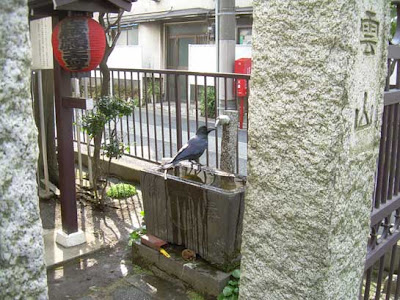 A crow uses the water meant for purification rituals near an altar to get a drink.
There are crows pretty much everywhere, but the Japanese crows are a special breed in many ways. First of all, they are huge. Second, they are not shy about being around humans. In fact, they attack people. There are sometimes videos on television that show crows swooping in and using their huge beaks to jab people in the head. One of my students told me she was on the roof of her building hanging her laundry and one attacked her. Also, the crows are clever. Trash has to have big nets placed on it or they will tear apart even the most secure bags. I've also heard that they learned how to unscrew milk bottles awhile back. The crows I saw back home as a child weren't nearly as big and tended not to go near people or their living spaces.

I won't miss these large and intimidating birds.
Posted by Orchid64 at 12:15 AM