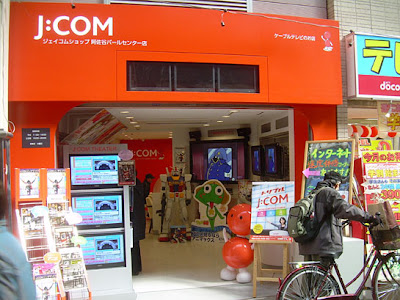 My cable television provider's local office.
Cable television in Japan varies in price, but the longer your building has cable, the cheaper it becomes. My monthly rate is now 2600 yen ($28) a month. I've heard various rates from friends and family in various areas in the U.S. and that price is quite cheap compared to what they pay. It's especially good for an urban area. Mind you, if your building has been newly hooked up, the rates might be around 3600 yen ($39), but it's rather nice to know that the prices will drop, and not because service gets worse (it actually has gotten better with more channels being added in). It gets cheaper because once the cable company gets back some of their investment in hooking up a building, they cut the price.

I'll miss getting such cheap cable television service.
Posted by Orchid64 at 12:15 AM