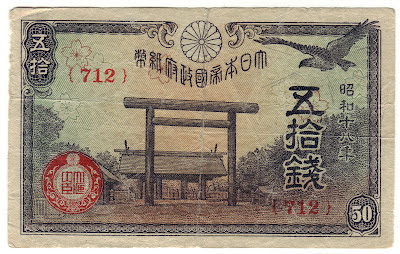 My first experience with Japanese money did not come along when I arrived at Narita airport for a vacation in 1988. In fact, I didn't take any American cash to Japan for exchange because of the unique circumstances under which I went there. My boyfriend at that time (now husband) was paying off borrowed money for college to his parents and I sent them my $500 and he reserved the equivalent yen he would have sent them for me to spend when I got there. Keep in mind that that was a fair chunk of money in those days as compared to now.

This neat little arrangement meant that neither of us had to filter money through a bank and "lose" on the exchange rate as the banks will add a yen or two to the rate to get their cut. It also meant that my first exposure to Japanese cash came in the mail and in a manner which had nothing to do with currency that I could actually spend. The aforementioned boyfriend sent me many interesting things that he was given or discovered while staying there for a year on his own. One of those things was the cash that I have scanned in for this post. I didn't know at the time, but it is a 50-yen (64 cents) note.

These were issued between 1942 and 1944 and feature the gate to Yasukuni Shrine. If that place doesn't mean anything to you, then check any news about controversial shrine visits by politicians. This is the place that angers China when Prime Ministers pay a call on it during the New Year's holidays. My best research, which means a quick check on the web and not nearly the "best" I can do, seems to indicate that these were withdrawn from circulation in the early 50's. 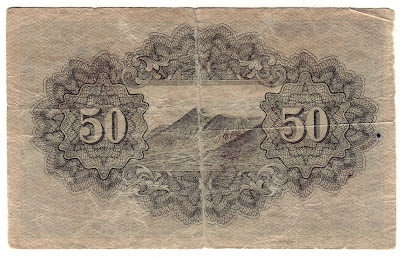 My husband can't recall where he got this, but his best guess is that a student gave it to him and then he passed it on to me. These days, people use 50-yen coins rather than paper money. I'm guessing that 50 yen was a lot more money in the years in which this was circulated. I'd also wager that this would be rejected as currency if one tried to use it these days. A bank might be required by law to take it in exchange for a more modern version. However, the frowning and brow-furrowing that would result, not to mention the time it'd take while supervisors all the way up the food chain were consulted to figure out what to do, would hardly be worth the 50 yen.

In terms of collectibility, my best research, and this is somewhat better research than that I did for finding out when these bills were removed from circulation, says it is for all intents and purposes, worthless. There are a few versions of a 50-yen note from that time that are moderately valuable, but this is not one of them. Still, as someone who lived in Japan for 23 years and was thoroughly accustomed to what the modern cash looked like, this is a pretty nifty item to have in my collection.
Posted by Orchid64 at 8:00 AM