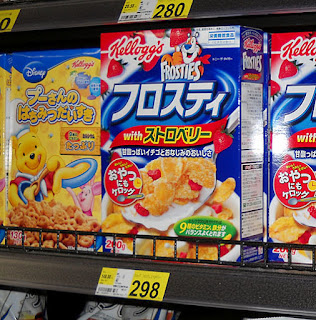 Strawberry corn flakes, probably there and gone, but thankfully so. ;-)

Sometime in early 2011, while still in Japan, I found a display of Celestial Seasonings specialty teas on offer at Queen's Isetan market in Koenji. I had never seen the flavors before (Chocolate Raspberry Bliss and Vanilla Strawberry Rose) and they cost about 400 yen ($4.43) a box. Since they were new and expensive, I bought one of each to try. By the time I discovered that I really loved one of them, they were no longer on offer. I can't tell you how many times my husband went overboard and bought up a ton of some import and had it go bad before he could eat it because he knew that it'd vanish and he'd never see it again. One time we found packages of South American strawberry bars which were similar to Fig Newtons and we bought up every one in sight (about 10 packages) and ended up tossing them out after a year because we just couldn't eat them fast enough.

It was very often the case that some import that I really loved was "here and gone" in a week (or less if it's snapped up by shoppers) and I don't miss having such a small window of opportunity to get some interesting item from a country other than Japan, but especially I won't miss the sort of mass-buying (followed by waste) we felt compelled to engage in when such items showed up.
Posted by Orchid64 at 8:00 AM