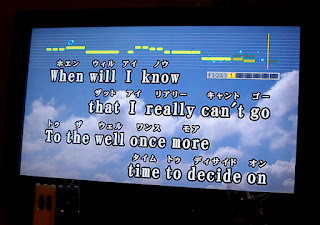 I've already mentioned that we had a pretty good landlord, but one thing I realized about him was that he did something that I experienced in other areas of my life in Japan (especially business). For the first 15 years of our time in the same apartment, he told us every little detail of work being done on the apartment building and surrounding area including when his wife would be sweeping up in the front and back areas. During those years, neither my husband nor I worked from home and we just said "okay." In my final 6 or 7 years, I was working from home and had actual concerns about noisy work. I expressed the fact that the noise was a problem or about the times at which work is done (because it can interfere with private teaching). After I did this, the landlord decided to stop telling us anything at all and simply scheduled loud and obtrusive work at his convenience. This is an example of a tendency (which I experienced many times) to tell you as long as no objection is expected, but to not tell you if an objection is even remotely possible. In other words, the idea that your opinion matters or that "harmony" is valued over expediting the interests of the person in power, which are commonly  held notions related to Japan being a culture based on consensus, is an act.*

The minute your interests have the potential to conflict with theirs, they simply cut you out of the loop and you have no recourse but to accept it because there is no law structuring how people are informed. I won't miss that.

*In America, these sorts of issues tend to be governed by law, so you are told what is mandated by legislation. There's no show being put on that your opinion matters or that your concerns are factored into what will be done, and you also have legal power to assert that you should be informed and have veto power when loud construction is going to be going on in the apartment above you starting at 6:30 am and going on all day. In Japan, such matters are left vague so that the power rests with the person who has the vast majority of it already.
Posted by Orchid64 at 8:00 AM