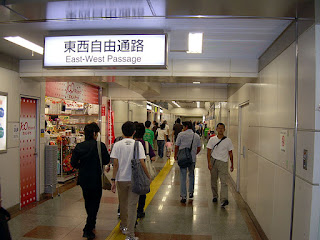 One thing that continues to annoy me to this day when I visit forums or news sites devoted to Japan is the way in which no issue or problem in Japan can be discussed without dragging other countries, well, actually, America, into the mix. No matter what you say about a problem in Japan, the counter-argument is that it's "worse" in America. Here is the thing, it does not matter what it is like in the U.S. when you are living in Japan and dealing with a problem in that country! It's not an international competition in penis sizes in which you have to be sure that Japan always comes out ahead because its social problems are comparatively not as bad as another country's. It's not about "bad", "worse", and "worst". It's about discussing an issue as it appears in a particular culture. When we talk about how the water has toxic levels of purifying chemicals in a city, the problem is not countered with, "at least it's not contaminated with sewage like it is in Bumblebone, Remote Island." The existence of a far worse situation elsewhere does not mean the problem at hand is to be dismissed.

People seem incapable of addressing an issue in Japan without trying to downplay it by comparing it to America. I don't miss this comparative that has to crop into every discussion of a problem in Japan.
Posted by Orchid64 at 8:00 AM