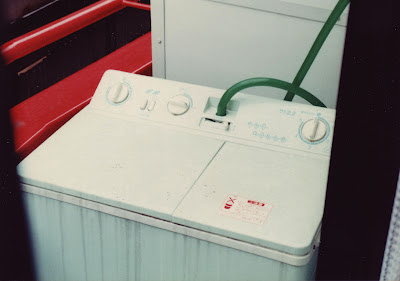 This beauty, so clean, fresh and lovely an appliance, was named the "Neo Queen", and was kept on a balcony that was favored by the more well-appointed cockroaches in Tokyo.

I have a lot of pictures of things which most people almost certainly do not have a picture of. For instance, I have a photo of the very first time I laid eyes on my husband, our first hug, and our first kiss. This was all due to the unique nature of our relationship, as my attentive readers may recall.

I also have a picture of many mundane things which people probably don't take photos of. Well, that's probably not true in the internet age when people blog about everything from how they cut their toenails to their first pair of jogging shorts. However, twenty-some years ago, people didn't take pictures of their new toenail clippers because they didn't have blogs to display them on and they didn't want to pay to have prints made to send to family about something so trivial.

In my case, since I was half of a long distance relationship and my boyfriend wanted to show me his new environment, I have pictures of a lot of the things which I used in Japan for the first time. I have a shot of the first rice cooker, first mini gas "stove", first tiny refrigerator, and first annoying as hell to use washing machine in Japan. Though not earth shattering in their importance, even at that time these things (well, not the rice cooker) represented inconvenience which was above and beyond what I experienced in the U.S.

The picture on this post is the washing machine in my boyfriend's apartment. Some of you may recognize it if you grew up in a home that lacked an automatic washer. These deals required you to manually add water (cold in Japan, of course) to the left side which had a tiny plastic oscillator that handled an extremely tiny amount of clothes. Once you put in sufficient water, which took forever and you had to watch like a hawk lest you overfill and have to drain it off, you added laundry and let it roll anemically. After that, you drained it like the slowest tub in the world and proceeded to manually add the rinse water and go through the weak agitation again. Finally, you dragged the sopping wet clothes over the a tiny basket on the right which would never balance properly as you attempted to spin most of the water out of the clothes.

This blue machine was the first one I used in Japan in 1988, but I also got one of my very own a little over a year later when I returned there in 1989. At that time, these were still pretty normal, especially for apartments. Even though everyone was using automatic machines back home for years before this, such labor saving devices were not de regueur in Japan. I'm not certain why that should be the case, but I can speculate based on things I observed and my personal opinions about the way in which women are regarded.

I read blogs written by several women who are married to Japanese men, and have heard a certain comment firsthand which reveals the way in which housework is looked upon. At least 4 women in relationships with Japanese husbands have said that, at one time or another, they said that they "washed the clothes and hung them out to dry". For those who don't remember from some of my posts (and it'd be easy not to remember with 972 posts in the can at this point), most people do not use or have clothes dryers." When women state that they "washed the clothes", their husbands say something to the effect of, "the machine washed the clothes, not you." Of course, the wives are upset that their efforts are belittled in this way, but notion among at least some Japanese men is that women are spoiled by such labor-saving devices and that it's hardly work at all when the machines are doing things.

Housewives in general are held in higher esteem in Japan, which is a good thing. However, because they are home all of the time, their individual efforts aren't always seen as valuable and their time absolutely is not. Labor-saving devices like dishwashers and clothes dryers aren't popular because women are seen as having the time to spend on such work. My guess is these pathetic washing machines (which are still sold in Japan!) stayed in use far longer there than in other countries because the laundry duties could be labor-intensive since it was perceived that women had the time to mess about with them.

There are other possibilities, of course. One is that they were cheaper to make and buy and Japanese folks just preferred the extra work and crummy results (clothes came out very dingy from those things) to spending a little more. Another may have to do with size or shape. However, we used less space with our small automatic (4.1 liter) machine than we did with the semi-manual machine. In fact, we used exactly the same laundry area with an enclosed plastic base for both types. Yet another is that they use less water. Still, few people use them now so something has changed and I think it is the fact that more women are working now than 20-some years ago.

At any rate, finding the picture of this machine reminded me of a lot of hated and time-consuming laundry duty in my early days in Japan as well as vivid memories of the unbalanced spin basket. Is it any wonder that I stopped wearing jeans after going to Japan? They were absolutely impossible to handle in such machines.
Posted by Orchid64 at 8:00 AM