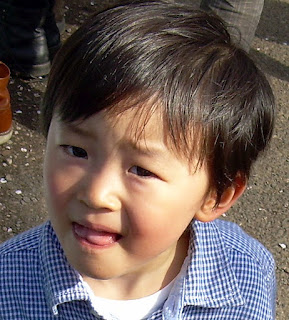 If his eyes look black, it's because I have a crap camera, not because they actually are.

One of the most common types of English lessons that I taught included asking students to describe themselves. This type of thing may seem a little silly in this day and age of digital phones with cameras and displays capable of showing pictures, but it is something that can come in handy if you're meeting someone for business and have to tell them what you look like or listen to a description of what they look like. Over the hundreds of times that I was conducting a lesson that required a student to tell me what he or she looked like, I probably heard them say, "I have black eyes," 95% of the time. I realize most Japanese people have quite dark brown eyes (irises), but no human has black eyes (except the pupil). I would explain this to students, along with the fact that saying your have a black eye means someone punched you in the face and your eyes are now surrounded with a bruise. Unfortunately, I was generally greeted with skepticism about the true color Japanese eyes. They were black, and my gaijin eyes couldn't possibly see this truth. They might patronize me by switching to dark brown, but if we repeated the exercise in the future, they'd say they had "black eyes" again.

Sometimes, I felt this insistence that Japanese eyes were black was another form of expressing the absolute uniqueness of the Japanese physiology and the skepticism I was greeted with when I said they were dark brown was about asserting a racial feature rather than a difference in color perception. I won't miss people insisting to me that they had "black eyes", particularly in light of how it sounded in English as if they'd been in a savage bar fight.
Posted by Orchid64 at 8:00 AM