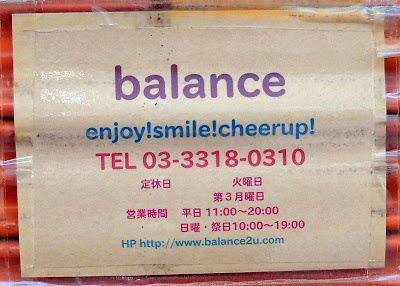 One thing that I didn't appreciate enough about Japan when I was there was how refined the style of much of what I was presented with was. This is, no doubt, because of the demands of Japanese consumers and a big reason why Japan has a reputation for taking something another country's people invented and making it better. I have been noticing with increasing frequency that things in the U.S. are generally just "uglier" than they are in Japan and thinks don't work quite as smoothly as they could in many cases. It's not that things aren't creative or purposefully designed, but they don't seem to be refined to a point where they have maximum aesthetic appeal and best functionality. You can look at or use such things and they are merely "okay", but there's a sense to them that something is not in perfect balance. In Japan, there seemed to be a much greater attempt made to find a balance, and I believe it was related to an amalgamation of personality and cultural characteristics relating to simplicity, meticulousness, minimalism, and attention to detail. I have the feeling that the Japanese worked hard to add or subtract as much as possible (and took the time to experiment) to get the presentation of things "right" in many (but certainly not all) cases.

I miss the sense that the style and function of many of the things around me had been highly refined to give the most pleasing presentation and best implementation, especially in the face of what I view as a rather high degree of ugliness and lack of sophistication in utility in things around me in America.
Posted by Orchid64 at 8:00 AM